Feeling present and reflective sitting at the local coffee shop, something about nomading feels like it’s making sense to me in the moment. Quick free journal. 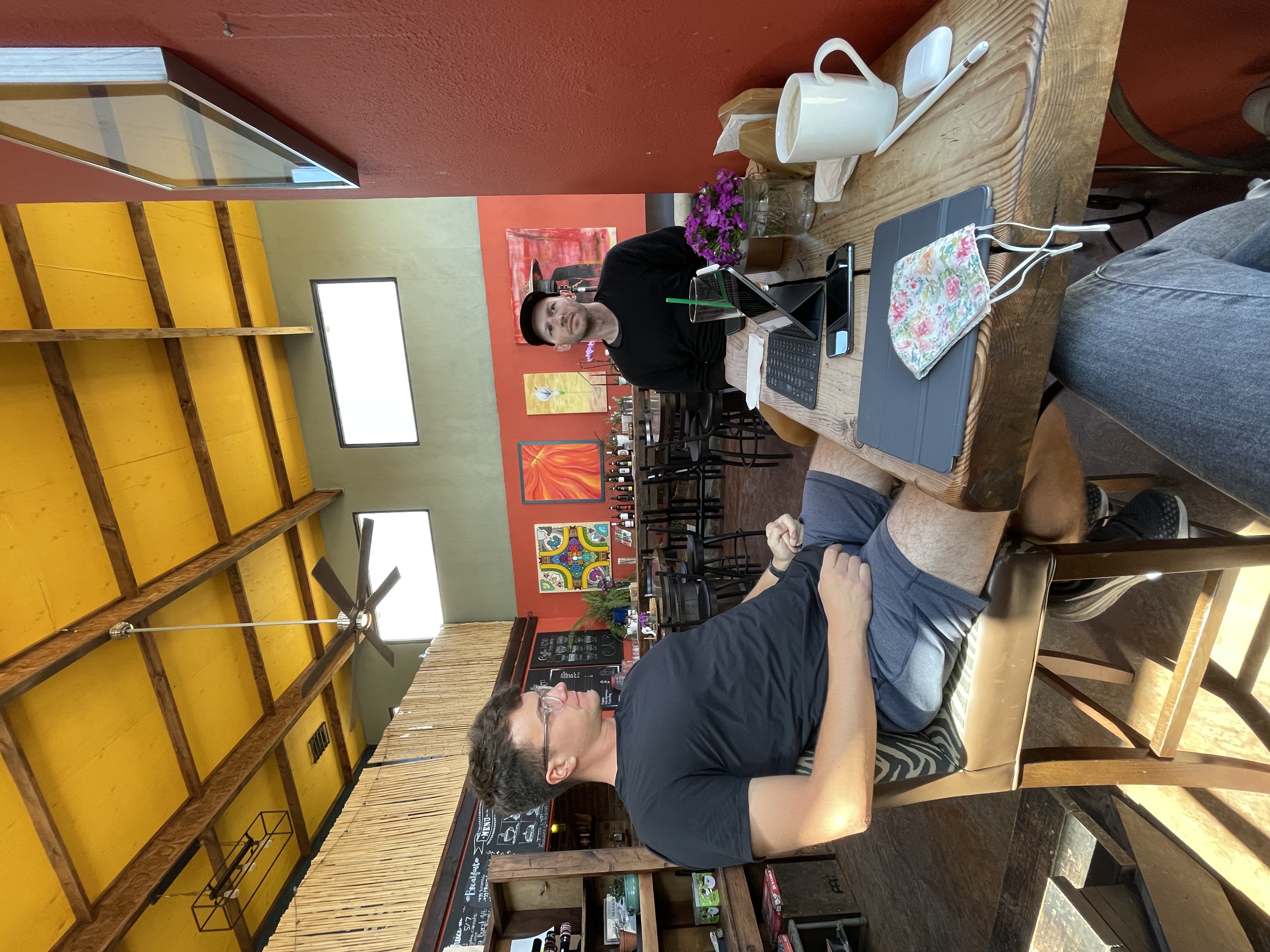 Live look into the cafe from yesterday with @Jon and @Dave

We left Oakland at the end of February, and have been through:

We’ve met tons of new people, reconnected with friends and family, slept in different beds, packed and unpacked the car over and over again. And it’s wildly satisfying. It’s a journey that’s enjoyable, and while it can be exhausting because the environment is always changing, there’s something else percolating to the top of my experience.

A sensation of feeling grounded in something beyond a permanent housing situation, beyond a predictable cadre of characters in a home town, beyond the daily expected experience I’d been attached to for the first 36 years of my life.

My sense of what is grounding me now is an experiential adventure through the concept of relationship. An evolving relationship to:

Instead of getting into a routine that is optimized for working a 9-5 type job, I’m optimizing for a continuous (re)forging relationships. The nomad lens of the world is that of connection, of relating to something, despite the constant churn and movement of life. It’s not about attempting to anchor down and find stability in stasis, but the opposite - finding comfort and identity in change.

Growing up my dad would always say, “change is the only constant”, and through the years I would remind myself of this. Over time, this phrase continues to develop in my mind, as I understand through new experiences and perspectives just how much is constantly changing.

The trick, you see, is finding the flow of energy that makes sense to you. This is what to attach to, to ground yourself. But this energy flow is moving, constantly. So the attachment is temporary, only for the purposes of making sense of a current point in time. Not for setting up shop and settling down.

Perhaps I’d become disillusioned with the concept of “settling down”, after trying it so many times over. In Ann Arbor during undergrad my parents would lament my decision to move every year (thanks for helping me move so often Mom and Dad); in Chicago, though I stayed for over a decade, I found myself in multiple neighborhoods: Lincoln Park, Ukrainian Village, Pilsen, and finally Logan Square. While Logan felt the most like home, and I’d bought property there, when the opportunity arose to move to California, I didn’t hesitate (though I did have an existential crisis moving out of the Midwest for the first time in my life).

The move to California really solidified my disillusionment with settling down somewhere. While beautiful and fertile, I found my relationship to the place to be vacant and more importantly, my relationships to the people there profoundly unsatisfying. I think that the powers-at-be were trying to get through to me: follow the whisper of the wind, the meander of the rivers, the crashing waves of the oceans, through fields of tall grasses, and dirt roads. Across highways, and into little nooks and crannies of the world. Go see what it’s like to live. Not to settle.

After a very busy 3-month start to the nomadic journey, including 2+ months in the urban landscapes of Southern California, we opted to take a bit of a pause by heading down to Baja California, Mexico. Though we’re just an hour or so south of San Diego, it feels like we’re worlds apart. The speed of life here is slower. Everything feels like it’s half finished, in progress—albeit in slow motion.

The small gated community we’re staying in is full of American retirees, fleeing something in the states. Or perhaps more specifically, looking for something here in Mexico. A different way of living, of being. La Mision is at a crossroads, further south and you’ll hit Esenada, a beachside city. Head east and you’ll find yourself in Valle de Guadalupe, known for its vineyards and wineries. There’s a feeling of coming and going. A strong American presence.

And everyone hangs out at the coffee shop on Highway 1 - the locals, and the passersby. If you sit quietly, you’ll get to experience the flow of energy of life that fuels a nomad’s journey. You’ll talk with your neighbors and learn of must-see beach spots in Baja California South. You’ll witness someone celebrating a birthday, the cafe turning on “happy birthday” music and bringing out a cake with candles. It’s casual, it’s unhurried, it’s alive.

And just as quickly as the cafe fills, energetic exchanges peaking, it empties and returns to quietude. Save for two older women in the corner in conversation, their laughter carrying across the room as soft coffee-shop music drifts across the space (a genre Dave may refer to as lesbian nap rock).

Follow the flows of energy. Form relationships, identities, attachments, but let them be fleeting. See what happens when you build your experience based on this flow, this constant change. The nomad life is perpetually on the verge of beginning again, and again, and again.