I recently watched a talk from the Game Developers Conference in 2018, and the title says it all: "Game Design Patterns for Building Friendships". The speaker (Daniel Cook, Chief Creative Office of Spry Fox) is a game designer with a focus on making happiness. His talk hits on meaningful relationships, friendships in particular.

There's def a lot to pull here for the [[relational OS]] we've been talking about, and Buzzard generally. So, here's a mashup of excerpts (screenshots) and summary from the talk, and some notes from yours truly.

Ok, so the basic overview is there are 4 laws of #friendship formation: 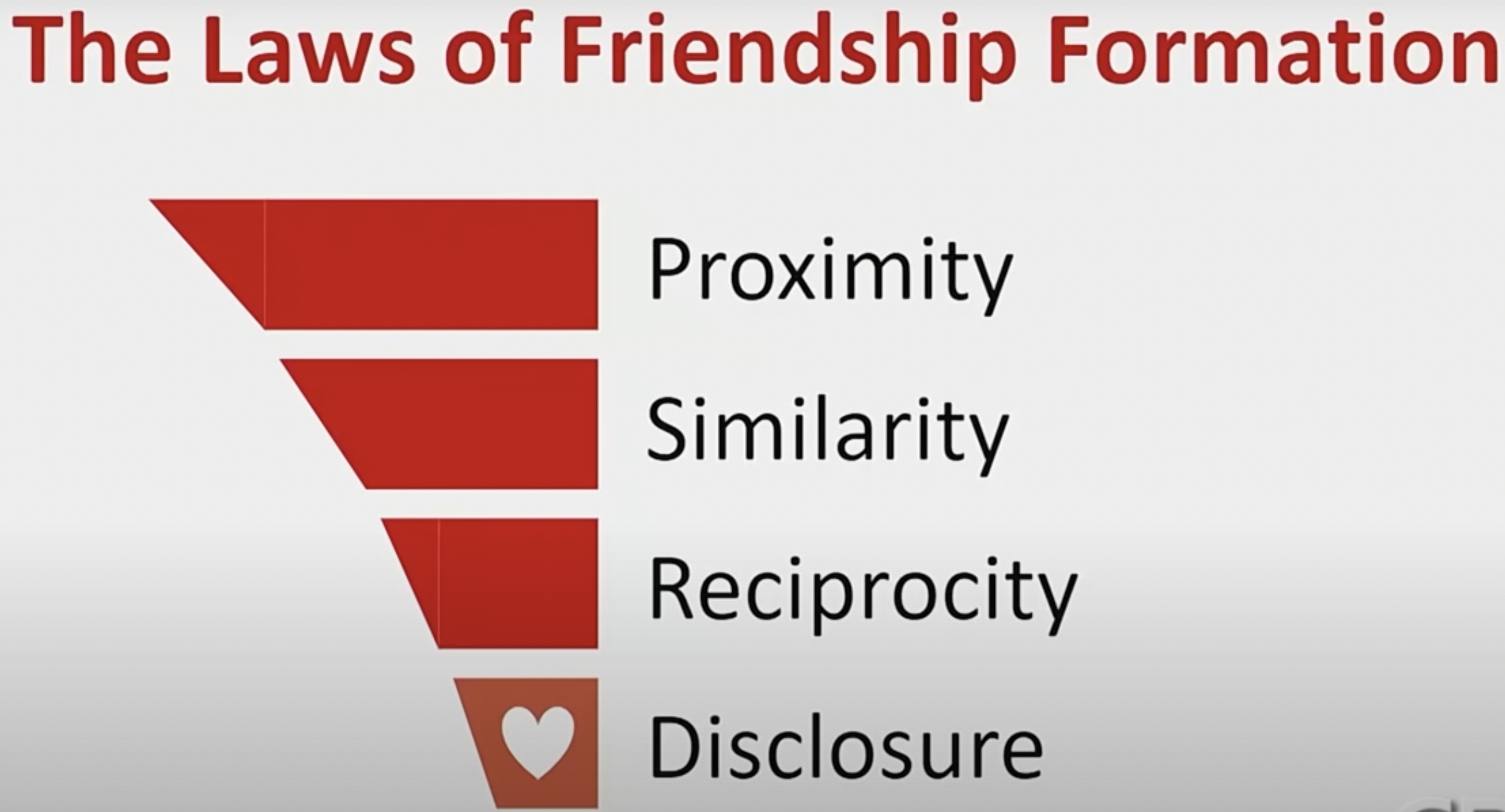 I think another way of visualizing this is a pyramid, kind of like a hierarchy of needs sort of thing, or the food pyramid. Here's another take at the 4 laws of friendship, pyramid-style 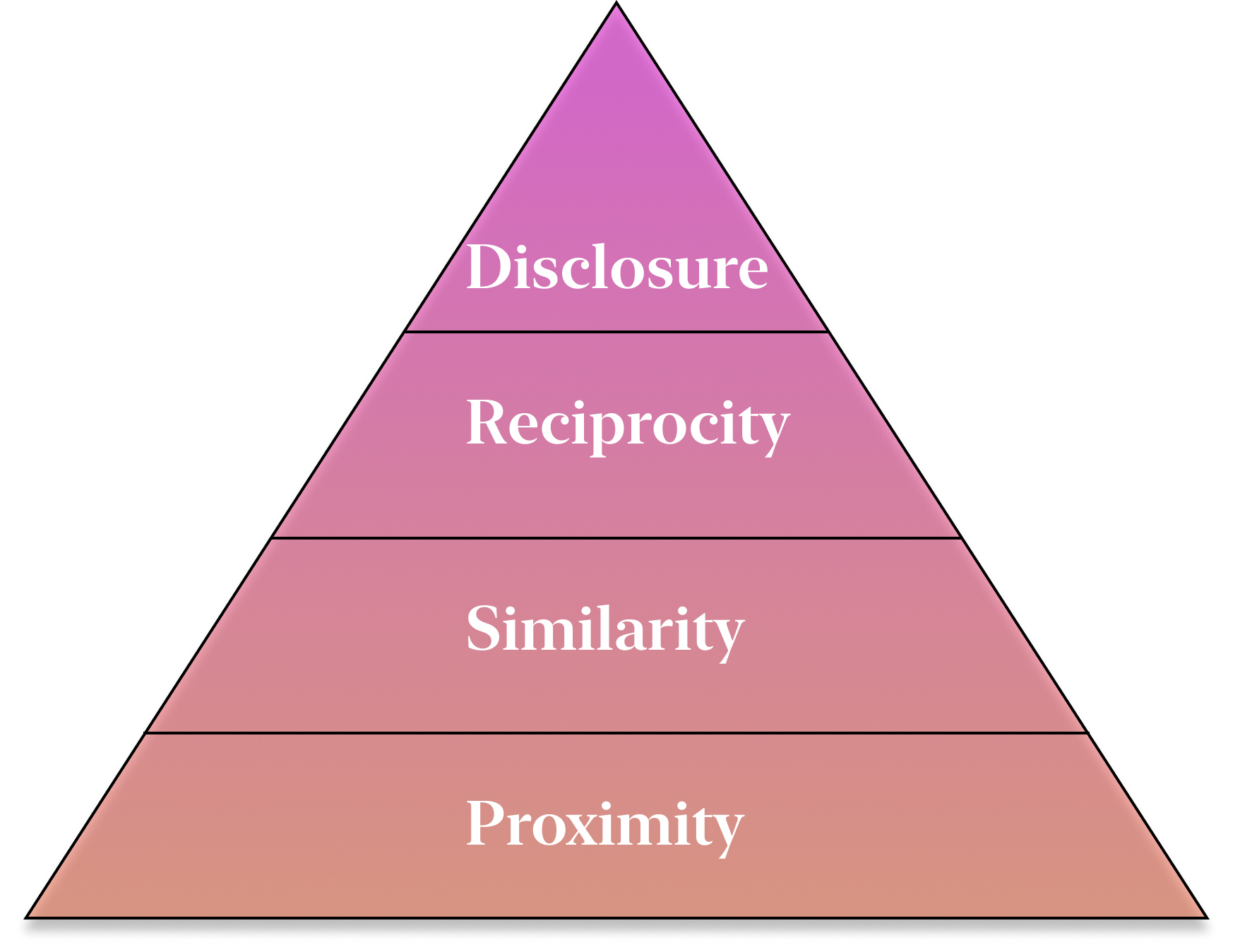 With this visualization, it's more clear that proximity is foundational, and something plentiful. In friendship game design, proximity is a must--after all, you can't be friends with someone if you can't interact with them. All the way up to disclosure, which really seals the friendship deal, but isn't necessary in all friendship endeavors. In fact, the key takeaway from the talk was:

We'll get to that in more detail later, but one way of thinking about this is, disclosure from the get-go isn't typically a great social dynamic to gamify. But used at the right time, in the right way, helps solidify a friendship. Let's start at the base of the pyramid and work our way up.

Proximity, or #propinquity in social psychology, refers to nearness to another person. In order to maximize #serendipity, this social distance needs to be accounted for, and in friendship games, we want repeat serendipity interactions.

Interestingly, this is where we start getting into logistics and math (the talk is not very technical, however)--there's plenty of details that I won't share here, but suffice to say, this stuff is definitely programmable. Much of the math has to do with density of people, and interactions.

Essentially, designing different games or features that drive changes in density: want large scale, intense density for a short period? Create an event. Want repeat encounters over a longer period of time in a relaxed setting? Create an offline community or daily challenges. My take away here was to think about people in terms of flow, movement. How to move people through the system to adjust proximity as need be.

Also, proximity and repeat serendipity help to build a persistent #identity; it's critical to give people repeat opportunities to show up and interact.

There's a few proximity things to watch out for, aka anti-patterns:

Some proximity patterns to explore for friendship design:

Succinctly described as the perception of shared [[cultural norms]]. The goal here is to use the fact that people gravitate towards people like themselves. This is because there's a lower cost of social negotiation when people are like us.

Be careful though! Too much reliance on continuously funneling people towards folks who are similar can result in an anti-pattern of something equivalent to #xenophobia or #nationalism. Don't want to create too much of a [[closed feedback loop]], where an #in-group is continuously feeding itself without outside influx of interaction.

Tools to use similarity in game design centered around providing the opportunity for people to create positive, fictional, identities (I'm curious how we'll lean into the fictional side of things, I think a fair amount). For example:

Reciprocity has a lot to do with building #trust through shared [[social norms]]. Take the context of similarity and layer on top: making a friendly offer and giving a positive response. Each time this happens - and it can be the most subtle (IRL - acknowledging someone with a wave, or nod, in passing and receiving a response), trust is built.

This building of trust is slow going, but with the right game play should be fun--at least in part. There's a fair amount of #vulnerability when you're not sure what the social norms are, which means that participating on either side of #reciprocity (the initiating or responding) can be challenging. And when trust is broken, and the social norms are broken, trust can be quickly lost. (This participation is akin to disclosure, see below; when disclosing oneself and rejected, this is when trust crashes quickly)

There's something here, with the inherent risk of developing social norms, relationships, building trust, that feels exciting to me. There's a #dialectic here: taking risk and engaging in socially normative behavior, through this combo, there's an #emergence of trust and #friendship.

Some of the tools and key aspects of reciprocity include:

Anti-patterns: what to be wary of with reciprocity:

There are reciprocation tools (screenshot below) that the speaker warns we should be careful with using, very intentional about how we use these tools. Lest we end up driving engagement because it looks good to have metrics rising (aka all social media tools now)--it's not only about engagement but healthy engagement 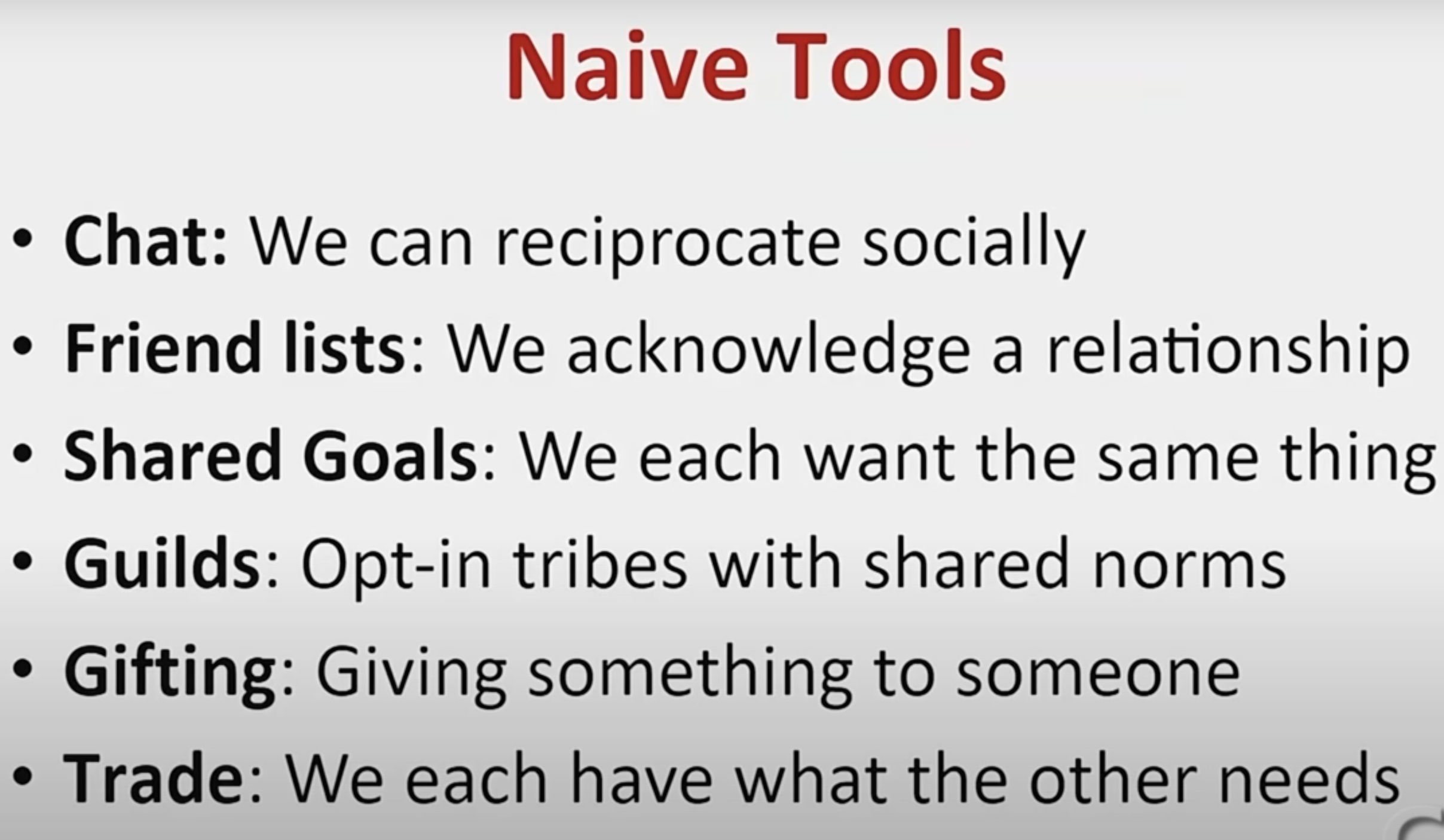 Main take away for reciprocity: design a protocol that intentionally levels up friendships, increasingly builds trust over time, and allows people to learn and grow at a comfortable pace

Disclosure is at the top of the pyramid because it's intense! There's typically a need to build up some trust before disclosing #vulnerable information. But the name of the friendship game is just that: revealing #weaknesses creates the strongest bonds.

This is that same #dialectic I mentioned earlier: share vulnerability about self and hope that you'll be accepted within the social norms that you've navigated so far. What can emerge here is growth and #friendship.

Disclosing too much, too early, or too often, kills friendships. This means trust is lost and has to be regained. So building in #disclosure over time is a good idea. As is giving people small, private arenas for disclosure - sharing something intimate shouldn't be required to the entire group at-large. 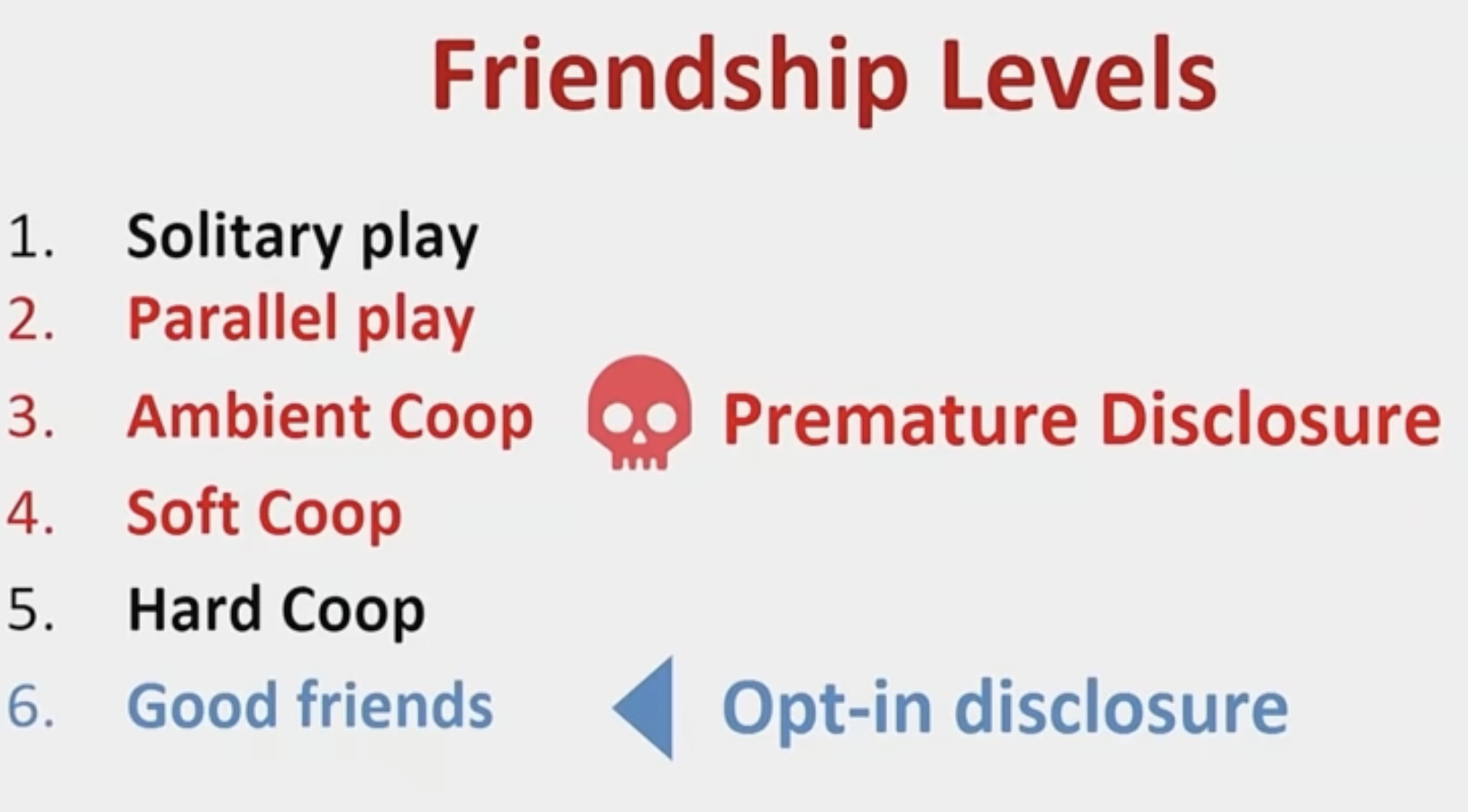 Another anti-pattern with disclosure is revealing too much too soon. Without finding common ground, this can trigger a kind of fear-based reaction--things like racism, sexism, ageism, etc. etc. So need to have a leveling-in of disclosure as people progress through friendship levels (see below)

What I like about the pyramid is that each level integrates the levels below it. So when we're talking about disclosure we're really talking about how friendship is the product of proximity, similarity, reciprocity and finally disclosure. Can't jump to disclosure without the early stages. In this sense, it's very #developmental in nature.

I think that the image below is pretty self-explanatory. There's different levels of friendship from solitary play to friends. Along these levels, friends work their way up the friendship laws from the bottom of the pyramid to the top. 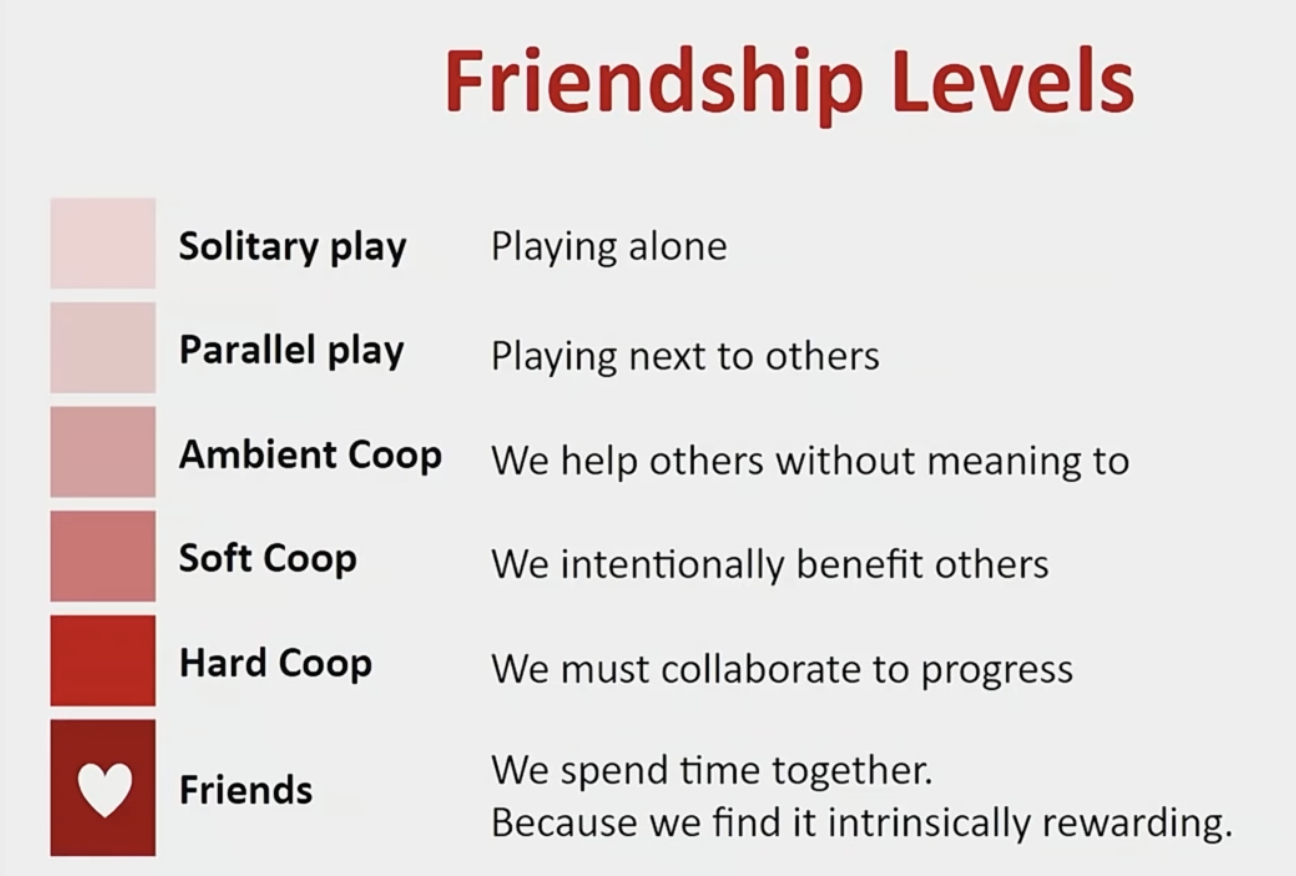 The image below gets at the game features or focus of game play that should happen along side the levels of friendship--a kind of "intimacy leveling-in". Good caveat that real friends, people you know prior to engaging in the game, they get to skip some steps. This makes intuitive sense. 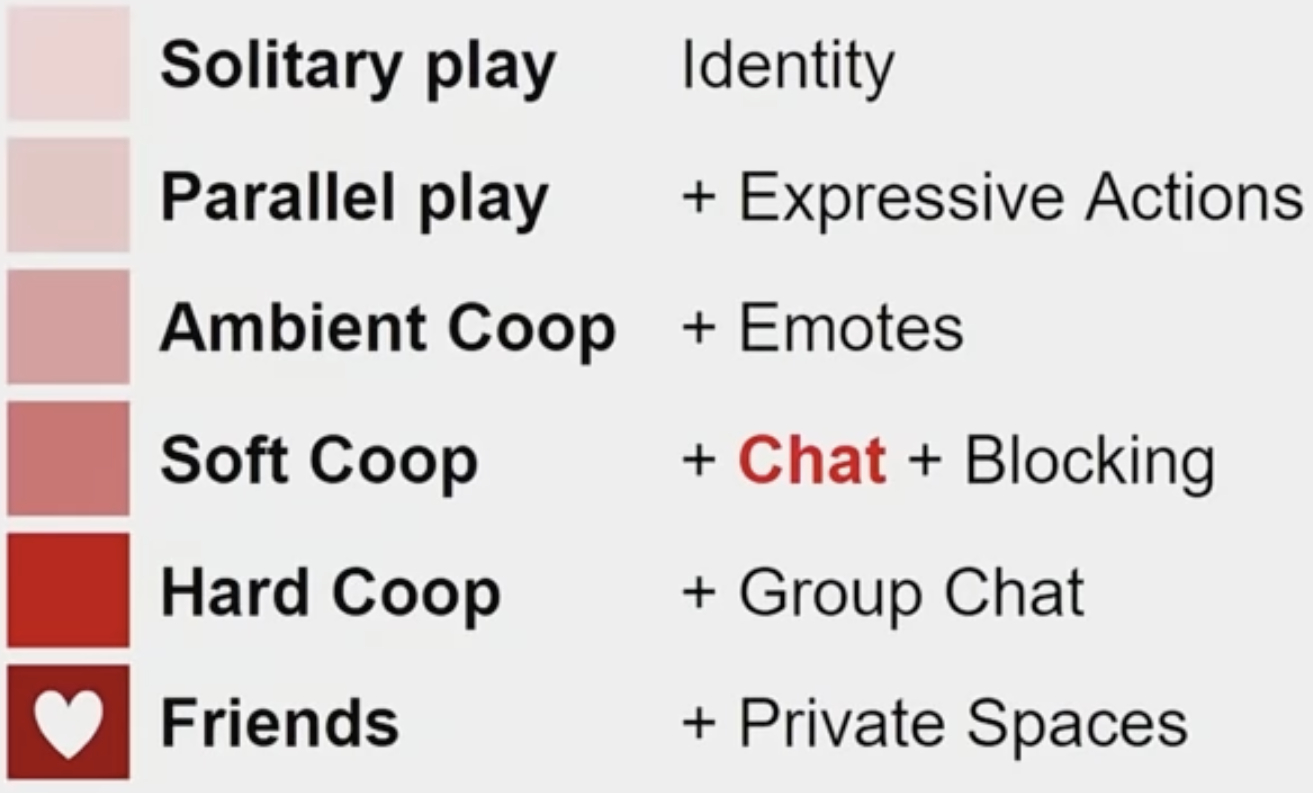 And last but not least - looking at the 4 laws of friendship and the different levels of friendship. Again, there's a developmental, or growth, lens to view friendship with. It's something that builds over time.