Last night I started drafting up my thoughts for what we're [[Buzzard]] doing with all of the moving pieces, and things are feeling way more cell-like than anything else. We've got ideas for a bunch of different types of entities within Buzzard and they all behave differently, and have different relationships to each other - but there's a holonic quality to them - where together they make up an integrated whole - emergent properties that not any one aspect or subset can create... 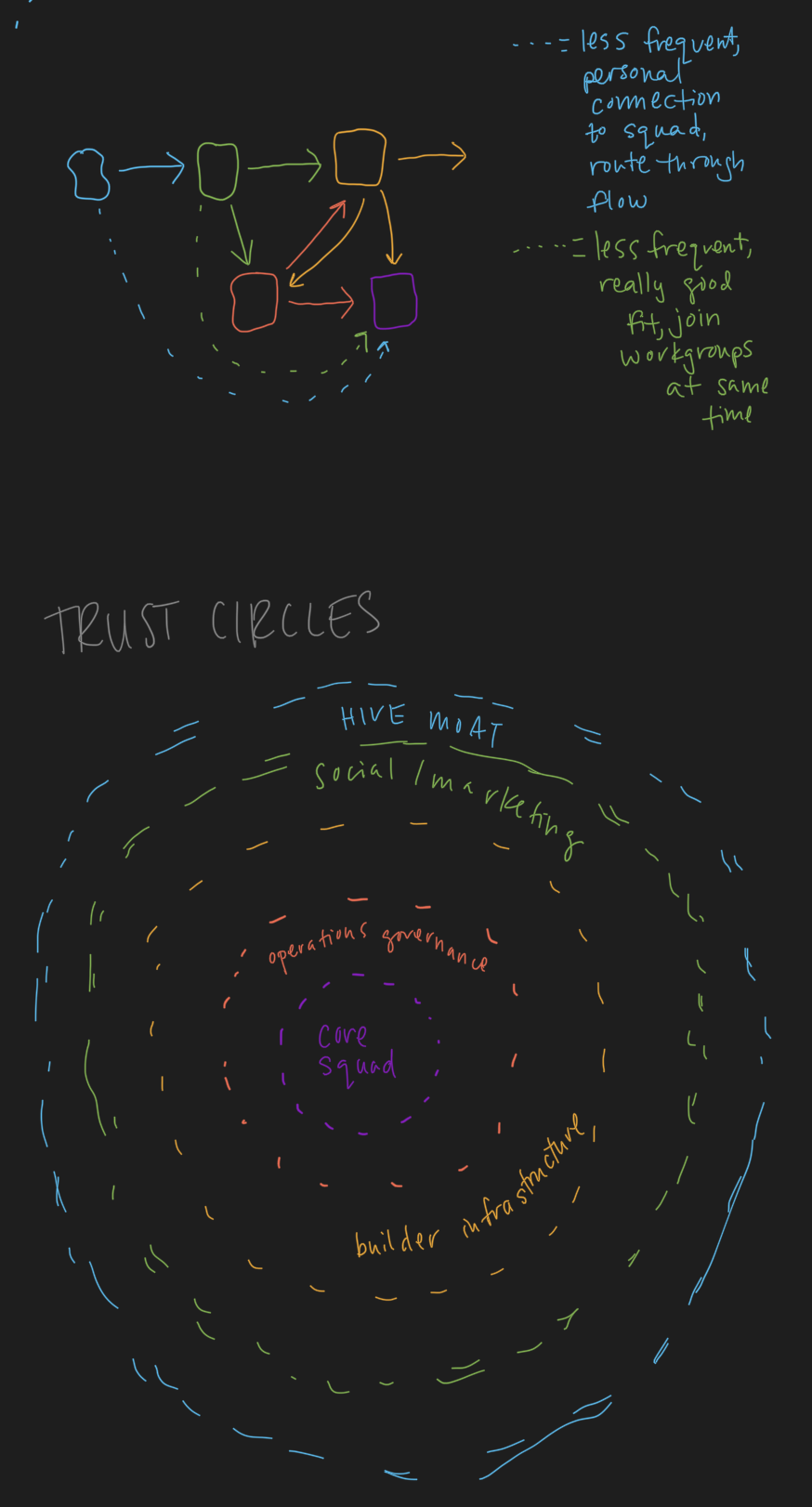 notes on doodles: I'm not sure how the workgroups differ but there seems to be a distinct felt-sense difference between operations/governance and builder infrastructure

I'm also not sure if the concentric circles work - I think this may be one perspective that's based on trust, but it doesn't seem to hold up, there's some faulty logic here because it's not as neat as concentrically stacked circles

The flow from blue to green to red/yellow to purple is rudimentary, but I think begins to show my thinking on how people find their way to the core squad. This embraces our ethos of participatory play through experiments - come join an event or workgroup and play with us, see what it's like to workplay, and if it's a mutual fit. I also think it's important to note that while the flow is shown uni-directional, backflow is always possible. So people in the core squad will also participate in workgroups and events. And anyone at any time can see themselves out and leave the ecosystem completely.

The flow from blue or green straight to purple is an attempt to acknowledge that we'll probably find people who are almost immediately a good squad-fit. My understanding is this would be agreed upon as a group, and we'd start including them in squad squawks, but with an understanding that they'd also follow the traditional flow and also participate in workgroups and events as appropriate. So this isn't a nepotistic jump to the front, but an affordance for situations where we run into people who are simply a good fit right off the bat. Perhaps wishful thinking. 🙃

some of the things about cells I think are relevant:

I think the key here is to take things slowly, and continuously adapt to the changing surroundings. The surroundings change because as we grow our knowledge (based on our own curiousity and interests) of how to grow a squad and build web3 software (which is in turn a result of the growing landscape external to us), we experiment with methods to enact this growth - building organelles and methods to communicate/relate between them and the cell.

IDK if the hive metaphor is played out, but it does feel like it has more throughput than the cell metaphor - at least for nomenclature. I tend toward biological system because I've studied them some and they make sense to me. But not sure how things would play out if we started talking about growing our squad cell using organelles and DNA. lol. All this to say, if this doesn't make sense, I can probably explain a bit verbally. This is my first take at writing this down and is mostly stream of consciousness.